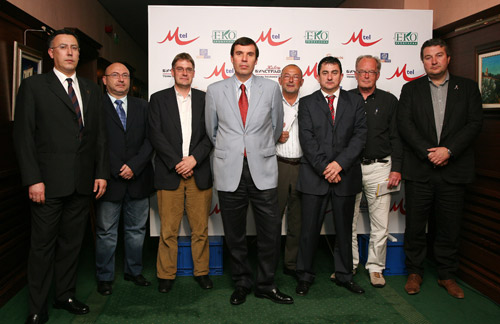 The Grand Slam is the most promising competition in chess

Have you ever wondered why chess players receive 10 to a 100 times less money than Roger Federer or Tiger Woods? Or why even 2600+ rated Grandmasters have to worry every day about paying bills and supporting families? Answering those questions is not as easy as it seems. The main cause is that chess is lacking sponsors. However, the factors creating this situation are multiple.

While TV coverage and higher FIDE credibility would certainly help a lot the image of chess, what this sport really lacks is “branding”. Unifying the world crown was a good step in a right direction, but it might take couple of years until it is recognizable worldwide. Quick action is needed, if chess officials intend the beautiful mind battle over the board to finally enter the 21st century.

These days the organizers of the world’s best chess events are making an important step for the cause. Heads of the Corus, Morelia/Linares, Sofia Mtel Masters and Bilbao tournaments have joined the quest of giving new prestige to the noble game. The Grand Slam Chess Association has been established in order to attract bigger sponsor pools and promote the competition on a higher level.

This is the date the world heard for the first time about the Grand Slam. The first news was posted on the Mtel Masters website. It announced a successful start of the negotiations. At the meeting were Silvio Danailov (director of M-Tel Masters), Martin Batkov (M-Tel CEO), Juan Fernandez (the Mayor of Linares), Linares Pedro Almansa (director of Linares tournament), Jeroen van den Berg (director of the tournament in Wijk aan Zee), and Hiquingari Carranza (the director of the tournament in Morelia). Even though a time line was given, nobody was sure in the successful end of the negotiations. No format, pointing system, or sponsors were announced.

“At the meeting in Sofia were discussed new opportunities for the popularization of chess and I am sure that the founding of the chain will increase the interest of the audience and of the sponsors as well, as without them no sport is possible nowadays,” said Silvio Danailov after the encounter.

At a meeting in Holland the organizaers of Corus, Linares, Mtel Masters, and Bilbao layed the foundations of the Grand Slam. The first three tournaments were logical members of the club since they are the strongest events of the last several years. The big surprise was Bilbao. It is famous for organizig man vs machine matches as the one in November 2005 with Kasimdzhanov, Ponomariov, Khalifman, Hydra, Junior, and Fritz. At the meeting was also announced a possible pointing system. It very much resembles the Formula 1 old system. The winner in each event is supposed to get 10 points, the second 6, and the third 2 points. The list of participants will contain between 6 and 14 players. There are rumors that the first four in the world rankings will be obliged to play in all events, or they will not be allowed to play at all. The rumor remains unconfirmed until nowadays.

Yet another meeting, this time in Spain. The rumors that Bilbao will be the fourth tournament are confirmed a day before Topalov and Judith Polgar play in a promotional blindfold event. The format of the Grand Slam was confirmed (6 to 14 players, top four must participate in all events). There will be a Masters event in the end with a total fund of 300 000 euros.

Grand Slam final negotiations are taking place in Holland. For several days rumors about the events are flying at Corus 2007. On January 17 the Grand Slam is confirmed as the events will be Linares Morelia, Corus, Mtel Masters, and a fourth tournament (on rotational basis).

At the end of the Linares Morelia tournamet, the organizers of the gave a joint press conference. The Grand Slam Chess Association confirmed the decisions from the previous meetings. At a press conference with Andoni Madariaga, representative of Bilbao, Juan Fernandez, representative of Linares, and Silvio Danailov, representative of Sofi­a, together with their Dutch colegues Dolf Vos, Jeroen van den Berg, and Theo Hoogland, announced that the tournament will start in 2008. Besides the four tournaments already mentioned, there will be a fifth one. The offers will be accepted until May and probably announced at the Mtel Masters 2007. The tournaments will keep their standart formats, but will also have coordination and cooperation mechanisms.
Bilbao will hold the final Masters in September. Besides, it is the place where the headquaters of the GSCA will be located. Among the objectives of the future tournaments are promotion of chess, elimination of fast draws, and improvement of media relations.

In an official press release, the GSCA announced that up to three more tournaments may be accepted in the Grand Slam. The applications can be sent until 8th of May. The tournaments must be at least category XIX and with sufficient prize fund. The good news is that the candidates are required to implement a system to avoid the non fighting draws.

For sure there will be future meetings of the GSCA. We will keep you updated.